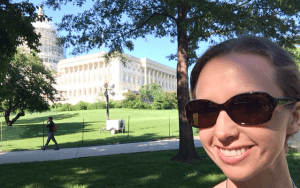 The Summer of Congress (and Mimosas)

As Donna tells us to say in our cold e-mails, “Greetings from DC!” (Yes, I’ve written that in an e-mail.)

—-> What are you doing this summer? I’m in the nation’s capital this summer working for Congressman John Conyers, Jr. from Detroit, Michigan. This internship placement is the result of both the Carlucci Fellowship, offered through Sanford, and the Rosenthal Fellowship, to which I applied in the spring. The Carlucci Fellowship encourages MPP students who are interested in National Security to pursue those interests; the Rosenthal Fellowship does the same for students passionate about International Relations.

—-> Why Congress? Aren’t you the oldest Congressional intern alive?! Ask seven MPP students what they want out of their internship this summer, and you’re likely to get seven different answers. Personally, I particularly wanted the opportunity to see something I’ve never seen before. Coming from the military, I’ve never gotten the chance to spend any time around Congress – so I pushed hard for this placement in the House.

—-> What’s the internship like? The internship started out as a strange but exciting blend of work and school. I was able to research a ton of different topics (from Haiti to PTSD, veteran suicide, the refugee crises in Iraq and Syria, and appropriations—and basically any/everything else in between), but there are still some of the downtimes and lulls that you often find in government jobs.

The high point, though, was when I was tasked to work on the Defense Appropriations bill in June. I first read the bill and pointed out a few things to the staffers – their previous amendment barring man-portable air defense systems, or MANPADS, to Syria was included in the base bill—a major win. Then, they allowed me to pitch some ideas for amendments—which they surprisingly and graciously accepted—and those amendments ultimately were successful, adopted into the House-passed bill.

I know that DC is where “How a Bill Becomes a Law” is set, but someone needs to make a “How an Amendment is Made and Proposed” cartoon. There are a surprising number of offices you have to run your amendment by (they’re all groups of lawyers with excellent names like the Parliamentarians and the Legislative Council) before even checking with the Congressional Budget Office to get their take on the “outlay” (don’t ask) of your amendment moving money from one defense account to another. I also learned what an “open rule” is, and how your Congressman has to be ready to go to the floor and insert his/her amendment where applicable, as the whole bill is being read out loud. Not to mention, I learned the importance of co-sponsors and a strange in-House system of e-Dear Colleague letters (Dear Colleague, please co-sponsor my amendment on four-day work weeks…). Those are just a few of the highlights of that memo-, talking point-, e-mail-, and phone-filled period.

Procedures and communication strategies aside, that 14-hour day encompasses the whole point of this internship for me. Not every moment has to be meaningful (that’s for you, Ashley)—you just have to be open to learning a few things that you’ve never been exposed to before. Nowhere else but in DC can you meet the Israeli Ambassador to the United States one day, research water security the next, turn around and write a draft bill, and then celebrate that a particular amendment was passed.

All that being said, after being around Congress for a month or so, I definitely appreciate that my experience could have been completely different had I been placed with another Congressman and another set of permanent staffers. Because the office that I’m in for the summer understands where my interests lie, they have been amazing at making sure I’m included in the national security, defense, and international relations-related topics going on in the office.

—-> Blah, blah, blah. Isn’t DC in the summer hot, crowded, and gross? Is there anything fun? Another priceless part of being in DC for the summer is being able to participate in the extracurriculars. Just in the past two weeks, I’ve pretended to be an extrovert and went to three—count them, THREE—Duke in DC events: a breakfast with Congressman Lipinksi, an American Grand Strategy networking event with Professor Feaver, and a ridiculously amazing Women’s Forum event with the Secretary of the Air Force and the Deputy Director of the National Geospatial-Intelligence Agency, among others.

Also, it helps having so many other MPP students in DC, since the brunch and happy hour scenes are excellent. I think we all highly recommend bottomless mimosas.

Comments are closed, but trackbacks and pingbacks are open.