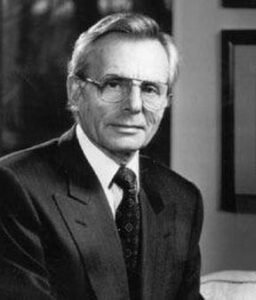 Frank Carlucci has a long and distinguished record of public service. He was U.S. Secretary of Defense from 1987 through January 1989, following his service as Assistant to the President for National Security Affairs, both under President Ronald Reagan. Prior to serving in these positions, he was chairman and CEO of Sears World Trade, Inc., a business he joined in 1983. Mr. Carlucci preceded this affiliation with a career in government service, which included Deputy Secretary of Defense (1980–1982), Deputy Director of Central Intelligence (1978–1980), Ambassador to Portugal (1975–1978), Under Secretary of Health, Education, and Welfare (1973–1975), Deputy Director of the Office of Management and Budget (1970–1972), and Director of the Office of Economic Opportunity (1969). He was a Foreign Service officer from 1956 to 1980, and he served as an officer in the U.S. Navy from 1952 to 1954. After leaving government, Mr. Carlucci was a managing director of the Carlyle Group since 1989, becoming chairman in 1993, and retiring as chairman emeritus in 2003.

A letter to the Fellows from Mr. Carlucci’s daughter, Kristin Carlucci Weed.